GBta is a not-for-profit, British Gymnastics Community Club that specialises in delivering fun, interactive trampoline sessions for children (2+) and adults of all ages, including those with special needs and/or disabilities.

We first opened our doors in 2008, but unfortunately had to close our doors to public sessions, but continued to deliver sessions to some exisiting clients.  We offer sessions in a variety of venues across the Royal Borough of Greenwich.

We deliver professional trampoline coaching and rebound therapy to Schools, Youth Clubs and other Community Clubs, as well as a Corporate provision  across London, and anywhere else it takes us!

Trampolining is an aerobic and anaerobic exercise, which means that it is a healthy way to improve flexibility, posture and stamina, and is a highly effective way to aid in weight loss.

On Saturday 7th May 2016, Harriet Jones, a filmmaker at Chocolate Films,a documentary film production company and social enterprise based in South London came to Greenwich Bouncers. They are working on a fantastic project at the moment called '1000 Londoners', where over a period of 5 years we are creating 1000 short portrait films (3-5 minutes long) on different Londoners in different parts of the capital. The intention is to celebrate London's diversity and build a picture of what and who the city is. Our films are screened online weekly and in cinemas across London too.

She did an interview with Anne-Sonia, which can be seen here (#150) on YouTube:  https://www.youtube.com/watch?v=5ti9Khl8t8w 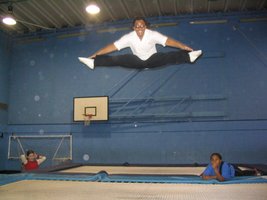 She started Greenwich Bouncers in 2008 with her youngest daughter, Chanelle, and in memory of her eldest daughter, Lydia, who had profound and multiple learning disabilities.  They were later joined by her other daughter, Natalie, and they have enjoyed working together ever since in various capacities.

Anne-Sonia first started working as a trampoline coach over 20 years ago and has worked for many Schools, Youth Clubs and Leisure Centres as well as some private organisations and individuals.  She has also worked for a variety of organisations and in a variety of roles including an Independent Living Manager for Greenwich Mencapy, a Charity that supports children and adults with learning disabilities and difficulties; an Adult Literacy & Numeracy tutor for Royal Borough of Greenwich, a Literacy Tutor to students with additional needs for Lewisham College, a Lecturer in Business at an East London College, an e-Learning Centre Manager for Greenwich Community College, as well as a personal development trainer and life coach.  But her main passion always has been, and always will be, Trampolining.  She is enthusiastic about trampolining and advocates it as a great way to get fit! 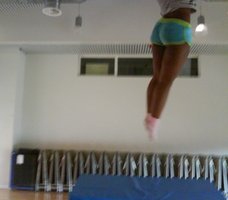 Chanelle first started trampoline classes when she was 6, but was first introduced to the sport when she was 3 as her mother (Anne-Sonia King) would take her 2 older sisters, but at the time she was too young to participate. For a while she was doing both trampoline and gymnastics classes but around 8 or 9 she had to choose as the classes were at the same time; so she chose trampolining, as her mother was the Coach.This became a problem  when she was a teenager as she didn't want to be taught by her mother anymore.  This, along with the fact she was getting very good, the moves were getting a lot scarier, and being in various accidents, put her off pursuing a career as an elite trampoline gymnast.  As there were no other classes in the area, she gave up the sport until she was 14 when she decided to return, but this time as a coach.

The reason she still coaches is because she loves the sport and it has definitely been her first ever passion. She also aspires to be the youngest female Olympic coach.

In recent years, she was forced to give up coaching between 2012-2015 whilst studying American Theatre Arts at Rose Bruford College, at that time the number one drama school in the UK. Theatre is definitely her other passion in life and it's very easy to pursue both passions as trampolining is so flexible and leaves time for her other creative endeavours.

She is particularly drawn to working with both children an adults with learning and physical disabilities as her eldest sister had a rare chromosomal disability called Trisomy Ten which basically means she had an extra chromosome on her 10th set of chromosomes. Trampolining is a great sport for all abilities as you don't have to be able to stand, see, hear etc. it's very versatile and a fantastic form of exercise.

She also runs a 6-week trampoline fitness class for adults and elite gymnasts, which focuses on building up core strength and stamina, as well as having the added bonus of helping you to lose inches!

... taking you to new heights!